Reflecting on the My Favorite Card Contest in SWCT

Right now, the Topps Digital team has started a contest in SWCT that offers users a chance at winning a Gold Elegant Weapons insert. The contest asks us to post our favorite card on twitter through the handy new share feature on the app. Not only do I love the contest and its BIG prize, but it really made me think – what is my favorite card? 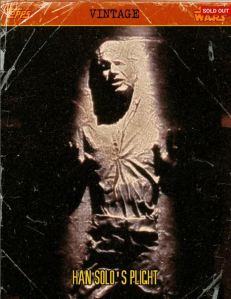 I love the Vintage set, as you will see from this post. I also identify with this card, because the scene literally traumatized me as a child. Han Solo was an untouchable main character in a movie franchise that helped define a generation. To see him captured and frozen in carbonite with that expression is one of the most memorable storylines of the original trilogy. Although I watched the movie YEARS after release (the movie came out two years before I was born), it was still powerful.  The card highlights the expression mentioned above, and was a payoff for months of hard work chasing down the set. I was floored when it hit the sheet, and it remains one of my favorite cards.

I love X-Wings and Tie Fighters. When I was younger, I built scale models and flew them around the house as depicted on this card. This design highlights the dynamic battles that made Star Wars more than a Space Opera, and more of a blue print for interstellar special effects creation. To this day, movies still pay homage to Star Wars’ epic battle scenes, and I love this card because it reminds me of that nostalgia as well. Being that it is a week 3 card, it has held value to this day, and I have always sought more copies for my collection.

Candidate 3 – Widevision Duel of the Fates

The entire set was based on dynamic depictions of memorable scenes in all the Star Wars Movies. Although Phantom Menace was a complete mess, this scene was amazingly done. The music, choreography, and ending were all incredible, and Darth Maul remains one of my favorite bad guys. When this card hit the sheet, everyone saw the potential for this set. Although “Help Me Obi Wan” is still more valuable as a week 1 release, this is by far the best card to look at. The movement it presents in the photo choice always makes me remember why I love the scene, and also why I love the card.

The set based on Christian Waggoner’s art is something to behold. Each card is more beautiful than the next, and they remain some of the most chased cards of any weekly inserts in the app. This was my favorite, as it was such an imposing piece, with an intimidating rendering of the fight between Vader and Kenobi. I love reminiscing with this set, and it has not been the last time SW artwork has been a part of the app. This was still my favorite example though.

Everyone has their one or two cards, and I have loved seeing people post on twitter with what their favorite is. Things like this highlight the community’s love for the app, and I love every minute of it.