Singularity Obsession: How 1/1s Have and Will Change Huddle in 2016

There is something about 1/1s that incites a feeding frenzy among the Huddle community. Being that there are literally thousands of people who are competing with each other to have the best collection, they speak to the people that thrive on that form of vanity within the app. Now that we have gotten a good picture of what Huddle is like for 2016, these are a bit of a game changer in more ways than one.

The 1/1s in 2016 are FAR from the first 1/1s available in Huddle, as last year there were HUNDREDS of similar cards, both pack pulled and won in gameplay mode. The top 1/1s of last year were the Parallax signature series cards, which were only available by pulling a special ticket that allowed you to choose your subject. That subject was then built into your own personal signature card, of which you had the only copy. These cards were impossible to pull, and thats not even talking about the cost of the pack.

There were also 1/1 gold cards released, very similar to this year, but in a much different pack format. Instead of releasing one at a time, they released batches of 10 over the course of a few days, until each team had their player. These cards are still some of the more valuable 1/1s, because as a pack pulled version, they are more valuable than 1/1s won from winning the throwdowns that took place on Monday and Thursday nights.

Why 1/1s Will Not Be Going Away

When the Aaron Rodgers hit the sheet, people freaked out. Some in a good way, thinking how cool the card is, and how much they want it for their collection. Others were not as happy, as they knew it was a promotion they would likely never be able to “win.” This led to a lot of people chiming in, but more importantly, it led to a TON of packs being ripped. Even though the next few cards have not sold out in 15 minutes, the packs are still being opened at record rates. People want the 1/1s, and they also realize opening a 5k pack and getting 1-3 gold cards isnt a terrible deal either. 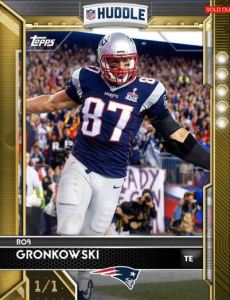 What everyone needs to realize is that Topps will not give up on a program that generates the type of craziness that 1/1s do. They are a business first and foremost, and because they can basically “print” on demand, there is literally zero reason not to continue pumping out the 1/1s until people stop buying. The community is obviously speaking  with their wallet, and that is really all anyone needs to look at.

Why Its Fine That They Arent Going Away

First off, the pack format is an amazing value at this point in the season. Because Golds were so difficult to pull, having a guaranteed pull rate on the golds for the cost of a normal pack is just amazing. I ripped the crap out of the original packs more because I wanted all those cards more than a 1:10000 shot at a 1/1 Aaron Rodgers. Obviously, the Adrian Peterson 1/1 that hit later that night was a bit different, but since then, its been tough to rip any other pack because of how important the golds are.

Even with the gold pull rates aside, this is one of those things that you can easily ignore if you are not interested. Not only do the 1/1s rarely hit the fan feed, they rarely have any impact on the game other than the fact that they exist. Basically, if you dont like them, dont worry about it. You wont be missing out.

For the people like me that love the chase associated with these cards, this is going to be heaven for you over the next few weeks from what it looks like. So far, its been one big name after another, and it looks like they arent stopping any time soon.

As we saw in Bunt, the allure of the 1/1 can change a release at the drop of a hat. Although right now we have only seen gold cards, its definitely possible that Huddle will use precedent set by Bunt and SW to release special cards.

Back a few months ago, Bunt released an Andrew McCutchen relic with an MLB logo, and I could very much see Huddle do something similar with an NFL shield to add some pep to the Relic series.

As for the ever growing number of boosts, I could easily see them using that as a vehicle as well. There is just too much left on the table if they dont go that direction with any of the different types of cards that they offer. For the most part, I am fine with that, even if it means my once complete Vikings collection is now incomplete forever.

If there is one thing that will be negatively impacted by this, it has to be the Gold player cards which are now flooding the app at a reckless pace. Because you can pull at least one per 1/1 pack, and those cost as much as a regular pack, people can walk away with 10+ golds in a 50k bundle. Where these cards were once very valuable due to the low pull rates on the packs, they have already come down significantly in value. High demand and low supply creates a chase. High supply and high demand still create a chase, but eventually demand will drop as supply stays high.

Right now, people are still looking to stock their lineup, so the impact isnt as big. However, as more of the 1/1 packs hit the market, the value will continue to drop as more golds hit the open market.

At the same time gold value is diminishing, lower rarity base will drop too. Although completing sets may keep the cards at a reasonable level, eventually that will fade. We saw this situation with Huddle last year, as people started to accumulate huge hoards of base cards.

This would actually be a great time to introduce Smuggler’s Den, and maybe offer a shot at some bigger boosts if people shred some of the massive amounts of golds hitting the market. That’s a whole different discussion in itself though.

I do have a few specific asks of the Topps team in considering the addition of 1/1s to their method of operation.

There are so many reasons why 1/1s are a really cool chase, and there are even more reasons why someone would want to own one. I think if this is managed appropriately, there would be no situation I can imagine where they wouldnt be chased like sharks with blood in the water. If things do get out of hand, like we have seen past years, that could change very dramatically. I am confident that with a full license now, there really isnt a big reason to go down that road, unlike previous situations where that happened.